Over the course of a 25 year career as a journalist, Adam’s published work comes to several thousand articles and six books.

The books cover three areas – business & investing, sailing and ocean racing and history. He is passionate about all three which often intersect in unexpected ways.

Unstoppable Force is a privately commissioned book written in 2017. 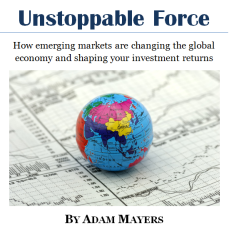 It tells the story of the rise of India and China and why these economies matter to Canadian investors. The narrative is intertwined with the rise of Toronto’s Excel Funds, an emerging market mutual fund pioneer.

Excel’s founder Bhim Asdhir had the vision to provide investment opportunities in India when others hesitated. His firm celebrated its 20th anniversary in 2018.  Excel was acquired by Sun Life Financial in 2018.

Beyond Endurance tells the story of the 1979 Fastnet race,  the worst disaster in the sport of ocean racing. 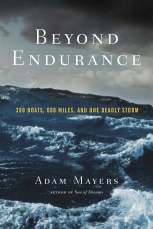 On Saturday August 11 1979, 303 boats set sail on a 600-mile race from the south coast of England to a lighthouse off the Irish coast called Fastnet Rock. They expected a challenge, but not the fight for their lives that developed.

A storm of near hurricane-force descended on the fleet and within the space of 30 hours 15 people died, 25 boats were abandoned and 136 people rescued. It was the largest British air-sea operation since World War II.

Beyond Endurance is available at Amazon or Indigo Chapters

Seas of Dreams is bestselling story of the most dangerous race on earth, a singlehanded  voyage around the world in a small boat.

The Around Alone was run every four years by the sailors passionate enough to undertake it.

Among them was Derek Hatfield, a former fraud-squad Mountie, whose forty-foot Spirit of Canada had cost him everything he had. The race took the fleet through wild storms of the Bay of Biscay, the frustrating Doldrums and angry Southern Ocean, and around Cape Horn in an adventure that nearly cost Hatfield his life.

Sea of Dreams is available at Amazon

Dixie & The Dominion looks at Canada’s role in the American Civil War, the last great military struggle on this continent.

The book examines the year 1864, with the war in its third year and a secret Confederate States mission sent to Canada.  The mission set off a 12-month campaign of terror that saw raids across the border, the firebombing of New York City and an act of piracy on Lake Erie from Canadian bases.

Dixie & The Dominion is available at Amazon or Chapters Indigo

day in a feature called Acts of Kindness.  About 2,000 stories were published and a book republished the best of the best.  Acts of Kindness is a an edited collection of 200 of the most memorable tales which illustrate that  small things can often mean a great deal.

The stories are a reminder that goodness is non-denominational, non-political, and transferable across race and language. They also remind us that although our lives are full of hard realities, the smallest gesture can raise a spirit or lift a heart, and the time to do it is now.

Acts of Kindness is available at Amazon  or Chapters Indigo

My first book was co-written, very quickly,  in the wake of the Quebec Referendum in 1995. The referendum  proposed sovereignty for the province within a new economic and political partnership with the rest of Canada.

The economic analysis and investment picks in the book stand the test of time because they stress diversification and risk reduction strategies that apply in a broader context today.

0 comments on “My Books”