August is usually the carefree summer month when life slows to a crawl before things pick up again in September.

Not so this year. The market has swooned and revived against a backdrop of headlines and presidential tweets that continue to be worrisome.  At the head of the list is the China-U.S. trade and tariff dispute, which escalated on Friday, causing stocks to plunge. Then there’s the U.K. wobbling toward a no-deal exit from the European Union and maybe an election; slowing global growth; falling interest rates, and negative yields; currency wars; and now the ‘R’ word.

Despite these headwinds, markets have held up reasonably well, though the big gains in the first quarter slowed in the second and seem to be heading for a break-even third. Before the Friday setback, the S&P/TSX Composite was 13.48% higher year-to-date and the S&P 500 Index was up 16.6%. Both are quite respectable.

It’s a good opportunity to take a look at how some of my recommendations have performed since joining the Internet Wealth Builder Team 18 months ago.

My strategy has been conservative growth with a checklist that includes companies that:

•Are dominant in their industries, with strong businesses and proven track records;
•Have strong balance sheets with manageable debt and a history of thriving in good times and bad;
•Pay dividends that have tended to grow over time;
•Show an ability to evolve and adapt by exploiting new technologies;
•Have a history of consistently hitting a lot of singles, rather than a few home runs with a lot of strikeouts in between.

Some have done better than the average and a few have under performed. Here are the top winners and the standout underachiever.

Microsoft (NDQ: MSFT):  This was among my first recommendations last March when the shares were trading at US $90.23. The stock closed last week at US$133.39 for a gain of 48%, before dividends. (Disclosure: I own Microsoft.)

Microsoft has a lot of momentum. It is the world’s largest software company and continues to gain from its 2014 strategic shift to cloud-computing services. As well, by moving its Office software from a one-off purchase to an online subscription, renewable each year, it has captured a revenue stream in perpetuity. That has stopped the sales erosion of Office, which runs on 90% of the world’s PCs.

The cloud computing shift has given Microsoft a lead in data storage and the growing fields of data analytics which includes artificial intelligence (AI), robotics, and the Internet of Things, which connect devices. Cloud computing uses internet-based servers to store and manage information, which companies and their employees can access remotely.

Microsoft also helps them interpret their data with software that learns with AI and Blockchain-based initiatives in such areas as healthcare, insurance, and financial services.

Microsoft was one of the best stock performers in 2018 and this year jockeys with Apple and Amazon for the top spot as the world’s most valuable company. Fourth-quarter 2019 results released on July 21 reflected the continued growth in its cloud business.

Adjusted earnings of $1.37 per share (results in U.S. dollars), were 13% higher year-over-year. Revenues of $33.72 billion were 12% higher. Intelligent cloud revenue, which includes the Azure cloud computing platform, was up 19%. Azure’s revenue was 64% higher.

The dividend increased each year between 2010 and 2018 and the annual payment of $1.84 yields 1.38% at current prices. As cloud computing evolves Microsoft will continue to gain.

The world’s largest operator of fast-food restaurants is doing several things well. It is renovating its U.S. and Canadian stores and changing its menus, which has led to higher same-store sales. It is selling off company-owned stores to franchisees, believing franchising is the key to profitability, since owners have an incentive to react quickly to changing local food tastes.

McDonald has more than 37,000 outlets in 120 countries with 44% of the outlets in Asia, or other emerging markets. The Golden Arches were China’s first taste of western fast food and the brand has a lot of loyalty. McDonald’s is on track to nearly double the number of restaurants in China by 2022, when it will surpass Japan as the second-biggest market outside the U.S.

The shares hit an all-time high on Aug. 12 of US$221.93 following July’s release of second-quarter earnings. While earnings and sales were flat because of the sale of outlets to franchisees, same store sales in the U.S. and Canada showed the biggest rise in two years.

McDonald’s last increased its dividend a year ago for the 42nd consecutive year. The US$4.64 annual payment per share yields 2.16% at current prices.

The shares closed in Toronto on Friday Aug. 23 at $48.54 and are up 16.1% since being recommended in March at $41.80. Brookfield has long been a recommendation of The Income Investor and was updated there by Gordon Pape in June.

It became an IWB recommendation this year as it is benefiting from two trends. One is the move to the clean energy, where it continues o expand its footprint. The other is lower interest rates, which reduces its borrowing costs and makes the dividend relatively more attractive.

The US$2.06 annual payment yields 5.64% at current prices. The dividend has increased annually in each of the past 10 years and the company has a goal of a 15% annual compounded rate of return to unit holders. 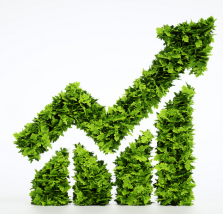 Brookfield reported a solid second quarter on July 31, with free cash flow per share up 35% year over year. In the quarter, together with KKR, it purchased X-Elio, a Spanish company that is one of the largest independent solar power generators. The plan is to develop 500 to 800 megawatts of new solar capacity annually over the next five years.

Brookfield also acquired 210 megawatts of operating wind power in India, made a $350 million investment in an Alberta renewables portfolio, and, through its subsidiary TerraForm Power, bought 322 megawatts in the U.S., nearly doubling its distributed generation footprint.

It continues to enhance its position as a global source of green energy.

IBM (NYSE: IBM):  International Business Machines is one of the world’s largest technology companies with operations in over 175 countries.

What started as a time-clock manufacturer in 1911 brought us the mainframe computer in 1949, the first PCs in the 1970s, and now leadership in such areas as Blockchain technology and artificial intelligence (AI).

The company is transforming again, and the shares are trading at US$129.57, up 6.7% since being recommended in mid-January at US$121.46.  IBM is moving into cloud computing and data analytics, where it is going head-to-head with Microsoft and Amazon. It is betting that investments there will offset slowing growth in its mainframe and consulting segments.

Results are mixed as the transformation unfolds, but the direction is positive. IBM is hoping that its US$34 billion offer for open source software firm Red Hat will lead it forward. IBM’s vast distribution and sales network gives Red Hat products new distribution channels. Red Hat users can make changes to its software under license and then resell it, which will help IBM expand its artificial intelligence and Blockchain initiatives.

In May, the U.S. Justice Department approved the Red Hat acquisition. In releasing second-quarter results on July 17, IBM beat profit estimates, helped by its cloud business which grew 5% to US$4.8 billion during the quarter.

On the minus sides, a stronger U.S. dollar dragged down revenue by about US$500 million. (IBM draws 60% of its revenue from outside the United States.) As well, revenue from its global technology services business was down 4% for the quarter, and sales from its systems business fell18%. The company updated its guidance in early August,expecting full-year earnings to be lower with Red Hat in the mix, partly because of an adjustment to deferred revenue.

ABB (NYSE: ABB): ABB has had a challenging year. As a multinational engineering company moving into green energy and electric cars, the trade war headwinds have hurt at a time when it is in transition.

ABB is a technology pioneer and being first has pros and cons. You can grab market share, but pay for it with R&D and other costs as competitors watch and learn from your mistakes.

It is a leader in electric vehicle charging systems including all the pieces of the future gas station –the bays, the plugs, and the software that runs it. It is also a leader in clean factories through its robotics and AI units.

On July 25, ABB reported a  sharp fall in second-quarter profit as a slowdown in the automotive sector and a charge for selling its solar inverters hurt its bottom line. ABB’s net profit fell 91% to $64 million, from $681 million a year earlier.

ABB has great technology and is well positioned to benefit from green energy trends but has so far been unable to capitalize on its strengths. For patient investors, it is a low risk way to participate in the growth of the electric vehicles and clean factories.

In the meantime, its US$0.797 annual dividend yields 4.33% at current prices and seems secure. Its trailing 12-month p/e ratio is25.87, reflecting its challenges.

This article appeared in the Aug. 26, 2019 issue of the Internet Wealth Builder investment newsletter.

0 comments on “4 winners and a loser”