A year ago, the shares of Canada’s publicly traded cannabis companies were on a high, but they’ve sobered up in a hurry as the speculative investment bubble burst and then COVID-19  piled on.

In the short run, the landscape is grim and likely to get even more so with restructurings, layoffs, consolidations and bankruptcies.  There are too few places in Ontario, the biggest Canadian market, that sell legal cannabis to begin with – and save for online sales at the Ontario Cannabis Store, all stores have been shut down because of the pandemic. In addition, there’s little hope for federal legalization in the U.S. any time soon. That leaves too many players, many underfunded, chasing too few customers.

“A conservative investor would find this sector hard to stomach,” admits Matt Bottomley,  the lead institutional cannabis analyst with Canaccord Genuity Group Inc. in Toronto. “But investors who are looking for growth? I can’t think of a better opportunity than the cannabis sector if you can  take the volatility.”

Mark Noble, executive vice president of ETF Strategy at Horizons ETFs Management (Canada) Inc. in Toronto, agrees that for those who can tolerate risk and are patient there is potentially a big opportunity.

“Canada was only the first inning of developed world legalization,” Mr. Noble says. “Long term, marijuana is a business that ends up as something like the size of the $100 billion global alcoholic beverage market. But at this point, you have no idea which companies are going to become the Amazon or Google of this space.”

The recent damage has been significant. The five biggest TSX-traded cannabis companies by market capitalization have lost an average 55 per cent of their value in the past year, according to Morningstar Research. Mr. Noble says if you take the sector as a whole, it is down between 60 and 70 per cent.

Horizons launched the first marijuana ETF in 2017,  the Marijuana Life Sciences Index ETF (TSX:HMMJ). It was down by about 66 percent in the 12 months ended April 24.

Mr. Bottomley says investor interest in cannabis took off in 2016 with anticipation of legalization. In 2018, the actual legal framework was somewhat different. Last-minute changes in Ontario soon after the election of Progressive Conservative government created disarray.

The previous Liberal government wanted to use the Liquor Control Board of Ontario (LCBO) model, with provincial pot stores attached to liquor stores. The Conservatives wanted a more entrepreneurial flavour and opened a lottery for the right to run stores. Some of the winners didn’t have the money or expertise and so only 40 of the 100 have opened.

In the meantime, the expectations created a situation where, as Mr. Bottomley puts it, “Canopy was a $30 billion company and for an afternoon Tilray was valued at more than Telus.”

The free-for-all created too many companies competing for the top two or three spots. They all expanded, invested and hired accordingly which has led to contractions, layoffs and consolidation since. 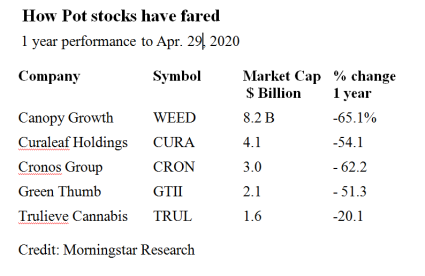 Smiths Falls, Ont.-based Canopy Growth Corp. (TSX:WEED) laid off 500 people in March. So far this month, it laid off another 85  people, announced the closure of some operations and the sale of others. Edmonton-based Aurora Cannabis Inc. (TSX: ACB)  has approved a 1-for-12 share consolidation, while  Moncton-based Organigram Holdings Inc. (TSX:OGI) has temporarily cut 400 workers.

Mr. Noble says the pandemic has been a surprising sales boost. The flurry of pantry loading has eased, but sales are still above pre-March levels.

The main issue is access to the U.S. Mr. Noble says Canadian pot sales are about $2 billion a year and will peak at $6 billion. Yet the U.S. with its patchwork state legalizations is already a US$ 12-to-$15 billion market.

Until there’s a change in federal law companies cannot list on the New York Stock Exchange or Nasdaq.  There were high hopes U.S federal legalization could come quickly should a Democrat succeed Donald Trump in the White House in November. That has changed. All the candidates were in favour, except for Joe Biden, who is the likely nominee.

The U.S. sales model is also more appealing with growers able to own retail stores, something they cannot do in Ontario.

“Retail is where the long-term growth is,” Mr. Noble says. “At some point marijuana becomes a commodity, so would you rather be a coffee grower or a Starbucks?”

This limited potential for growth means more of a shakeout, with 2020 “a kind of a do or die year” for some mid-tier players.

On the other hand, growers like Canopy, Leamington, Ont.-based Aphria (TSX: APHA), Organigram  and Cronos (Group Inc. TSX:CRO) with large market shares and a growing international footprint, should be fine.

Mr. Noble believes an ETF holding a basket of stocks is the way to capture the upside.  Cannacord’s Mr. Bottomley prefers stocks.

” It’s hard to be bullish in the current Canadian climate, but I like Organigram and Aphria on execution and relative valuation,” Mr. Bottomley said. “If you believe Canadian companies will be part of the global cannabis trade, then companies like Canopy and Aurora as well.”

But although the future is bright, he sees purchases now as speculative buys with a five-year time frame for holding the stocks.

You might like:
Liquor companies have ‘compelling’ valuations as demand rises
Why gold is down, but not out, as virus spreads

(This is an edited version of an article that appeared in the Globe Advisor section of the Globe & Mail’s Report on Business on Apr. 29, 2020.)

0 comments on “After cannabis stock selloff, better prospects lie ahead”